The building which we refer to as Molly Carrooin’s Cottage started out life in the early 1700s.   At that time it was not a cottage but in fact a weaving shed used by Mr Crowe who lived in a cottage where the barber’s car park now stands.

In the early 1800s this was turned into a cottage by the addition of a chimney stack on the outside of the building (most Manx cottages have the chimney stack on the inside and flue running up within the thickness of the gable wall).  In a will dated 1817 it was referred to as “my little house”.

The cottage was thatched and the photograph on the mantelpiece, which was taken around about 1860, shows how it was.  Floor level was below the level of the road and therefore the earth floor of the cottage was subject to flooding from time to time.  When a slate roof was put on around 1900 the walls were raised in height and the floor level brought up.

If you look at the side gable facing the Cassa Field you can see the projecting stones to which ropes were tied to hold down the thatch.  You can also see the line of the original height of wall and the amount by which it has been raised.  The cottage has never had water, gas or electricity let alone drainage.

Molly Carrooin lived in the house up to the time of the First World War with her sister.  Their only means of support was by taking in washing and this they would dry on the bushes of the black smithy across the road where the Department of Transport depot now stands.  It is reputed that when one sister built up the fire to boil the water for the wash the other sister would go up to the Manx Arms with a jug and have it filled with ale to help them through their task.  When they left the cottage they moved to St Catherines Terrace which runs immediately behind the Manx Arms. 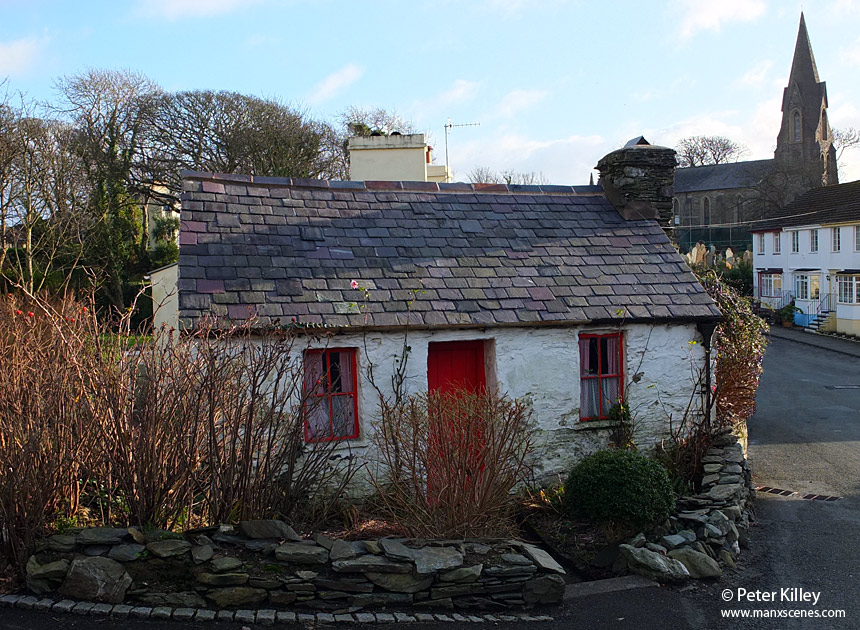 cottage was presented to the commissioners in the 1970s by the Misses Skillicorn of Summerhill Road on condition that it was kept as a traditional Manx cottage.  The cottage has been furnished and is open from time to time courtesy of the Friends of Onchan’s Heritage.