Groudle Glen Railway opened on 22nd July 1896 by entrepreneur Richard Maltby Broadbent. R.M. Broadbent as owner of Bibaloe Beg Farm saw an opportunity when an electric railway was planned to travel around Banks Howe (the hilly headland now used as the King Edward Bay Golf Course) to act as a suburban railway to link Douglas with the proposed satellite town to be built on the hill under the name of Cliftonville.

Utilizing the valley at Groudle, which was part of his farm, he had the Groudle Hotel built and developed the valley as the "Fern Glen of the Isle of Man". He planted the trees we see today in their mature state and created a sea lion pool at the extremity of his property. He opened the glen and hotel for business in September 1893 to coincide with the electric railway opening for business. He continued to develop the glen, and during the winter of 1895 and spring of 1896 he laid out the track for a narrow gauge railway which opened with a single loco and three carriages in 1896.

The railway fell into disuse by the 1960s but a group of local railway enthusiasts decided to restore what was left of the Victorian feature over 20 years later. Their achievements are remarkable. Photographs in this gallery were taken by Allan Blackburn of the Glenesk Guest House in Royal Avenue West, Onchan. 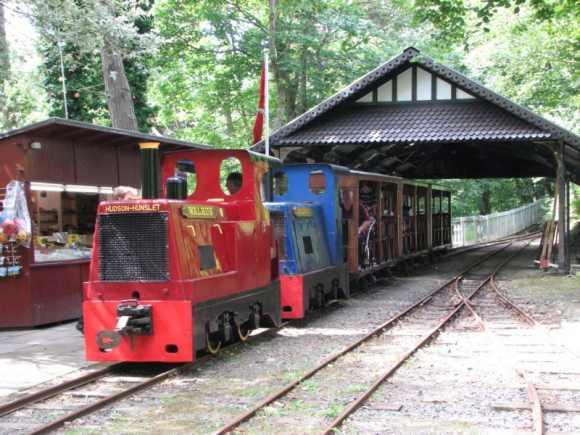 Walrus and Dolphin are pictured ere at the Lhen Coan Station. They were originally built by Hudson-Hunslet as diesel locos for shunting in a London brickworks. At that time they didn't have a cab or the false chimney which were added when they started their second life at Dodington Park, a country house with its own amusement park.

The locos and lines were purchased by the Groudle Glen volunteers when they started their work restoring the Victorian railway and were used as the workhorses in taking materials along the track as it progressed into the glen and out on the headland. On special days they became the passenger trains with seats put in the work trucks. 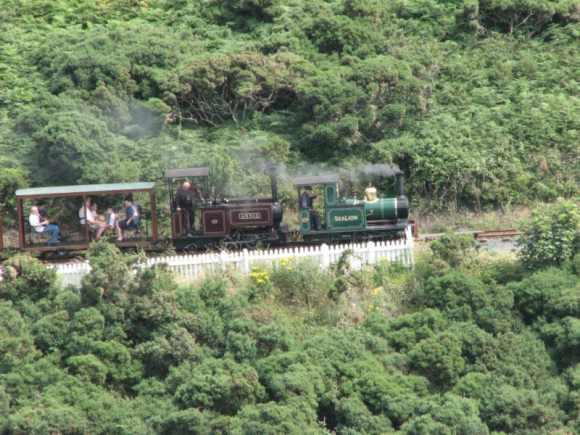 Taken from across the valley by telephoto lens, here we have Sea Lion and Annie about to leave Lilm Kiln Halt to head out to Sea Lion Rocks. Sea Lion belongs to Groudle Glen Railway and is the original 1896 loco heavily restored by the apprentices of Sellafield as a project. Annie, the other loco, was built by Richard Booth, a tax consultant with offices at The Village Walk in Onchan.

The carriage is one of three built up from the remnants of the original carriages on Richard Maltby's railway. Some parts were salvaged from the glen, some were in the hands of John Walton of Kirk Michael who had Sea Lion in his collection. Other bits were handed in by members of the public who had taken them over the years as souvenirs. The carriages were rebuilt by Harold Flavel, one of the volunteers and a former lecturer in building construction at the Isle of Man College of Further Education.

The loco now at Groudle was built up from the chassis of the last battery electric loco to be made (in 1988). A new body to replicate the 1920 version was made and added by Alan Keef and Co of Ross-on-Wye. Prior to coming to the island to commence service in 2004 she was on display at the National Railway Museum in York. The refurbishment work was greatly assisted by a grant from the Manx Heritage Foundation who have also helped with other aspects of the overall project. 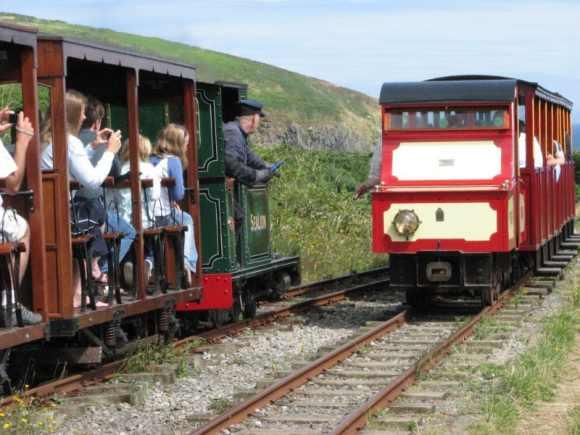 Passing on the loop and exchanging batons to give the right of passage on the line ahead are Sea Lion driven by Colin Kelly and Polar Bear under the control of Tony Beard, Chairman and kingpin of the Groudle Glen Railway volunteers since its inception.

Polar Bear was pulling replica coaches which were made by John Bray and Harold Flavel in the 1980 to replace the former ammunition trucks that were first used in conjunction with the diesel locos in the early days of the re-laid track. 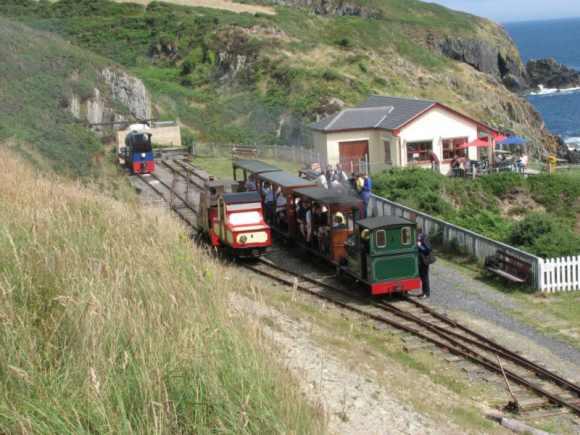 Here the photographer has captured four of the five locos working on the line to celebrate the 110 th birthday of the Groudle Glen Railway. Out at the buffers is Dolphin and nearer the camera on the same siding are Walrus and Polar Bear. Ready to take passengers back to Lhen Coan Station is Sea Lion.

On the right of the picture is the café building erected by the volunteers in 2000/2001. Unfortunately the outbreak of Foot and Mouth Disease in the UK saw precautions in the island which restricted access into the countryside and consequently the café didn't open until 2003. 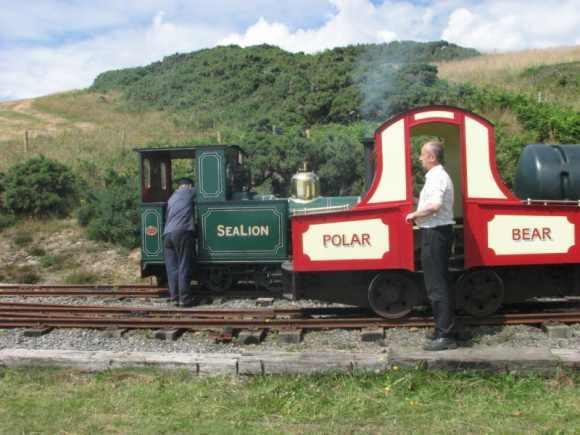 Taking a break at Sea Lion Rocks are Colin Kelly making some adjustments to his steam locomotive and Tony Beard who had been driving the batter electric Polar Bear.